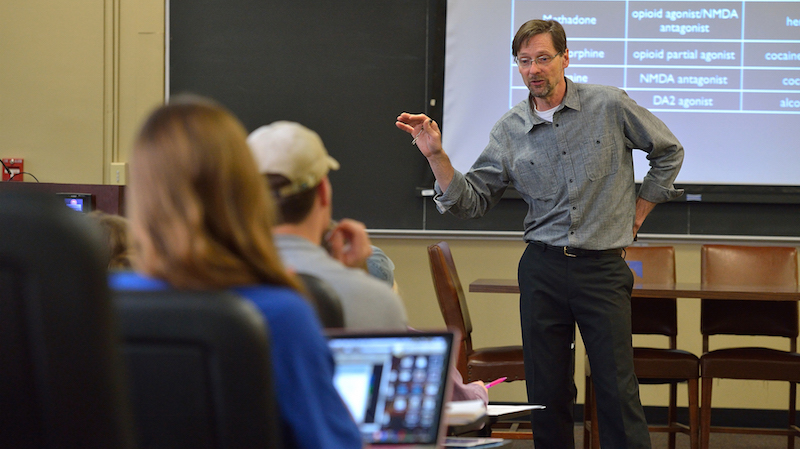 Ken Sufka lectures to one of his classes. | Photo by Robert Jordan/UM Communications

A respected University of Mississippi teacher and researcher is this year’s Carnegie Foundation for the Advancement of Teaching-Council for Advancement and Support of Education Mississippi Professor of the Year.

Kenneth J. “Ken” Sufka, professor of psychology and pharmacology, received the prestigious honor Thursday (Nov. 20) at the U.S. Professor of the Year Awards celebration in Washington, D.C. The program salutes the country’s most outstanding undergraduate instructors and is the only national effort to recognize excellence in undergraduate teaching and mentoring.

“When I first read the letter, I was flat-out dumbfounded. I had to read it again,” Sufka said. “The CASE-Carnegie Foundation Award is by far the most prestigious recognition one can receive in this profession. For CASE-Carnegie to think that the entire body of my academic work is worthy of such recognition is both overwhelming and humbling.”

In addition to an all-expenses-paid trip, Sufka got a framed certificate of recognition. Winners were also recognized at a congressional reception and have opportunities to participate in media interviews, speaking engagements, teaching forums and other events.

“Dr. Sufka is a role model at our campus and is now a recognized model of excellence to the nation,” said Richard Forgette, interim dean of the College of Liberal Arts. “We are proud to have him as a faculty member at the University of Mississippi.”

“(He) has produced more final theses with our high performing Honors students than any other professor on campus,” Sullivan-Gonzalez said. “The ethic of excellence that guides his work and interaction with our students creates a powerful magnetic attraction to those who want to push the boundaries of knowledge and wisdom.”

Sufka is most deserving of the award, said Michael T. Allen, chair and professor of psychology.

“I immediately felt a sense of pride for him and the Department of Psychology, but I wasn’t really surprised,” Allen said. “Dr. Sufka has won essentially all of the awards for teaching and service that the university bestows, and he has been a magnificent teacher and mentor of students for many years. What makes him so special is his love of teaching and his constant effort to become better and better at it, along with his sincere desire to have students succeed in his classes.”

Sufka earned his bacheor’s, master’s and doctoral degrees from Iowa State University. Before joining the UM faculty in 1992, he conducted research at Drake University, Des Moines University and Duke University. Sufka is a visiting research fellow at Newcastle University and an associate member of the UM Medical Center’s Cancer Institute.

“The University of Mississippi was a good fit for me when I was offered the position and it remains a good fit more than two decades later,” Sufka said. “It offered the right balance of teaching and research I was hoping to find in a mid-sized, flagship university located in a great little college town. While the university and Oxford have grown considerably, I am still able to find that perfect balance of teaching courses in psychology and engaging in laboratory research in neuroscience.”

Sufka said he is following in the footsteps of professors who taught and mentored him.

“I think all of us can point to a teacher/mentor that inspired and nurtured us in immeasurable ways,” Sufka said. “Professor Ron Peters at Iowa State University was that person for me. His love and enthusiasm for teaching, alongside a masterful ability to convey the most complex and interesting material, made it clear that I wanted to become a brain scientist and university professor.”

Sufka teaches several courses at UM, including General Psychology, Biopsychology, Psychopharmacology lab, Physiological Psychology and Teaching of Psychology seminar. A campus favorite among students and faculty alike, he has received the 1996 Elsie M. Hood Outstanding Teacher Award, the 2005 Faculty Achievement Award and the 2006 Thomas F. Frist Student Service Award. His other awards and honors include Top 20 Psychology Professor in Mississippi, Distinguished Alumni Award from ISU’s Department of Psychology, Presidential Citation from the American Psychological Association and Top 40 Under 40 Mississippian.

Sufka holds professional memberships in the Society for Neuroscience and the Society for the Teaching of Psychology. With research interests in behavioral neuroscience and psychopharmacology, he has written more than 67 refereed papers, 10 book chapters and one book, “The A Game: Nine Steps to Better Grades” (Nautilus Publishing, 2011).

“I wrote that to help my students at UM to better transition from high school coursework to college level course work, or from lower division courses to the harder upper division courses,” Sufka said. “It is an academic survival guide of sorts that detail a number of bad habits commonly exhibited by students that contribute to poor grades and offers evidenced based tips/strategies that promote course learning and yield much higher grades.”

Many colleges and universities across the U.S. have used Sufka’s book for specific programs.

“Some schools, like UNLV and Washington State University, have given it out as a summer reading assignment for their incoming freshman classes,” he said. “This has led to my giving numerous faculty and student workshops on promoting students’ academic success across the country and here at UM.”

Sufka has been the principal investigator on grants and contracts totaling more than $660,000. A prolific author, he has presented more than 120 conference papers and abstracts.

CASE launched the awards program in 1981. That same year, the Carnegie Foundation began hosting the final round of judging, and in 1982 became the primary sponsor.

For more about the U.S. Professor of the Year Awards program, visit http://www.usprofessorsoftheyear.org.