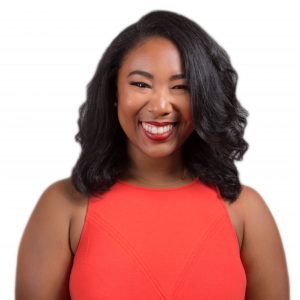 “I found incredible diversity in my double major. In psychology I learned from and worked with clinicians and behavioral scientists while digging deep into social and multicultural psychology. My African American studies major made sure I knew how to dig deep into the historical archive, understand Black feminist theory, and trained me to think like a social scientist.”

Since earning her master’s degree in African American Studies from UCLA, Frierson has been working in the world of non-profits. She created programming around social justice and leadership for young people across Mississippi with the William Winter Institute for Racial Reconciliation at UM, and has moved to the national stage with New America, a non-profit think tank dedicated to public problem solving, located in Washington D.C.

Why/when did you decide on your undergraduate majors of African American Studies and psychology?

I absolutely love this question! Like many, many young people, I began my first semester of college in 2007 firmly believing that I would go the pre-med route and one day become a doctor. I signed up for the biggest and hardest biology course available and, unsurprisingly, bombed spectacularly. No matter how much I studied or how many office hours and tutoring sessions I attended, I just could not understand the material. While I was struggling with biology, I excelled in my smaller-sized honors college courses, especially my intro honors, gender studies, and psychology classes. And though they were all challenging, the materials and theories clicked for me. I still didn’t want to disappoint my parents by not becoming a doctor of some sort, so I decided to focus on psychology (I could still become a psychiatrist!), and by the time I took my first African American studies course I knew the double major liberal arts life was for me. Because I took classes every intersession and summer, I had the space to take all the courses that interested me and probably could have picked up a few more majors!

My proudest academic accomplishments at UM are inextricably linked to the work I did on campus as a student leader and intern at the William Winter Institute for Racial Reconciliation, a nonprofit that was then housed at UM. Though it was lovely to be recognized as a Who’s Who scholar and make the Dean and Chancellor’s list each semester, I’m most proud of the work my fellow interns and I did at the Winter Institute and two awards my peers gave me: the Sarah Isom Center for Women and Gender Studies Georgia Nix Miller Activism Award and the UM Black & White Diversity Affair Social Equality Award. The texts I closely read and theories I was exposed to in my psychology, gender studies, and African American studies classes, which were all so cross-cutting, gave me the frameworks through which I could ground the work my classmates and I were doing around issues of equity, inclusion, and justice.

What has been your education and professional journey since graduation from UM?

Well, much to the dismay of my parents, I did not become a doctor of any sort! Because I was so profoundly impacted by my African American studies professors and courses at UM, when I found out I could continue my studies at a higher level I jumped at the opportunity. I applied to and was accepted into several M.A. programs in Black studies and ultimately chose UCLA’s African American studies program. Though I had every intention of pursuing a Ph.D. once I finished my M.A. program, I realized that the work I was called to do involved capacity and community building back home in Mississippi at the Winter Institute. For almost four years, I served as a youth engagement coordinator at the Winter Institute creating programming around social justice and leadership for young people across the state. In 2017, I moved to Washington, D.C. to work with young millennials at New America, a non-profit think tank dedicated to public problem solving. I created programming for and managed the Millennial Public Policy Fellowship, a fellowship that created opportunities for underrepresented young folks passionate about examining the public policy challenges facing their generation. I now support New America’s President and COO and manage special projects across the policy spectrum with an emphasis on diversity, equity, and inclusion.

Why study AAS/psychology at UM?

What I loved most about being a Psychology-African American studies double major at UM was the incredible diversity I found within both fields. In the Psychology Department I learned from and worked with clinicians and behavioral scientists while also digging deep into social and multicultural psychology. Similarly, my African American studies degree made sure I knew how to dig deep into the historical archive, understand Black feminist theory, and trained me to think like a social scientist. As someone who loves variety and has broad interests, I was thrilled that I could sample a little bit of everything before finding what really excited me from both fields. There’s no way that I could do the nonprofit work that I do around diversity, equity, and inclusion if I didn’t have the foundation laid by both of my degrees or the support from the incredible professors at UM.