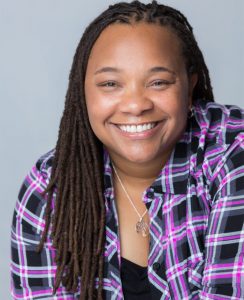 A native of Tupelo, Mississippi, Tina Mabry graduated from the University of Southern California’s School of Cinematic Arts with an MFA in Film Production in 2005.
She is a writer and producer for Fox’s upcoming series, PROVEN INNOCENT. She coproduced, wrote, and directed the second season of USA’s hit drama QUEEN OF THE SOUTH. Tina produced, wrote, and directed OWN’s QUEEN SUGAR created by Ava DuVernay and Oprah Winfrey. She produced and directed MELODY 1963: LOVE HAS TO WIN, an American Girl special for Amazon Kids that earned her a DGA Award and a NAACP Award. Tina’s other television directing credits include Netflix’s DEAR WHITE PEOPLE, ABC’s THE MAYOR, HBO’s INSECURE, FX’s POSE, and STARZ’s POWER.
In film, Tina began her career cowriting the feature screenplay ITTY BITTY TITTY COMMITTEE directed by Jamie Babbit. The film premiered at the Berlin International Film Festival in 2007 and won Best Feature Narrative at South by Southwest Film and Music Festival.    She wrote and directed her first feature film, MISSISSIPPI DAMNED, which garnered an impressive 13 awards in 15 film festivals including Best Feature Film and Best Screenplay at the Chicago International Film Festival in 2009. The film premiered on Showtime Networks in February 2011.

One of “25 New Faces of Independent Film” in Filmmaker Magazine’s July 2009 issue,

Tina was recognized by Out Magazine as one of the most inspirational and outstanding people of the year. She was featured in the Advocate magazine as part of their Top 40 Under 40 feature of individuals raising the bar in their respective fields.

Listen to her interview on the Creative Breakthrough podcast to discuss “How to Turn Rejection Into Success” (audio + transcript): https://funnybrowngirl.com/tina-mabry/